While driving in Northern Maine, Jamie Smith came upon a lost pig named Buster who wanted to say “hello”. After greeting the friendly pig and giving him a cookie Jamie drove on his way, but don’t worry, Buster eventually made his way back home.

“Buster’s owners, Stacey and Brian, say they’ve raised him like a dog, or even a kid at times.

“We made him our buddy,” Brian explains. “In the summertime, he gets daiquiris and deserts for breakfasts and then he gets some grain and what not, whatever we can come up with and he’s just part of the bunch. He hangs out. Does campfires with us in the summer and in the winter time, he runs amok and startles the neighbors.”

All this snow shuts down Buster’s electric fence, giving him prime opportunity to go out and meet the folks in Bradford, Maine.” –WABI TV5 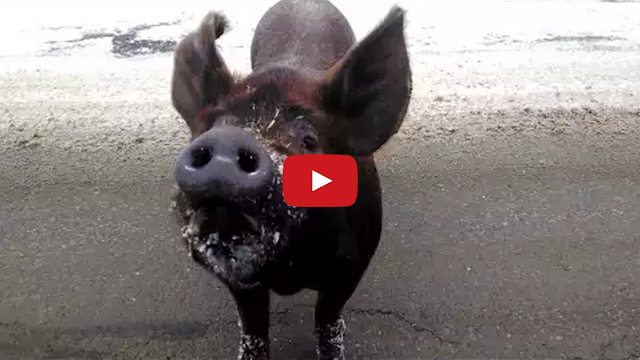