Daniel Baxter‘s “How It Should Have Ended” animated parody series humorously imagines some much more realistic alternate scenes from the 2002 Star Wars prequel film, Star Wars Episode II: Attack of the Clones.

“There were far too many scenes to cover in Star Wars Attack of the Clones. Like why doesn’t anyone follow the money trail when the clone army is discovered being ordered by a long dead jedi? Why don’t the Cloners Aliens ever call to confirm someone will come get their giant army after waiting 10 years to grow them? Why does everyone just let Dooku walk around? Why does OB-1 not mention that Dooku says the senate is being manipulated by the Dark Lord of the Sith? Why not make that public? The HISHE would be over 30 minutes long and we might have collapsed trying to build all of those scenes. So we hope you enjoy the scenes we chose. It was a very fun episode to work on. “

Previously: How ‘Star Wars: The Phantom Menace’ Should Have Ended 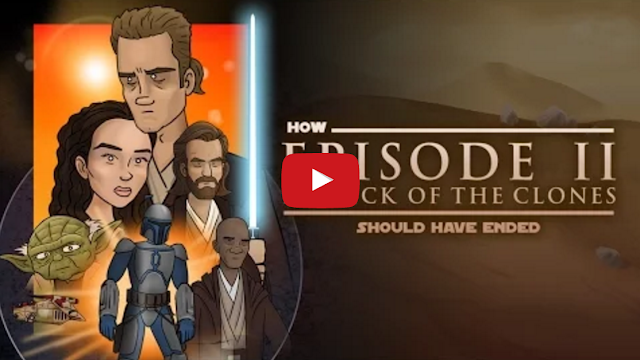