While visiting South Africa for the Cape Argus Tour cycling event, cyclist Oleksiy Mishchenko filmed this hilarious video of his friends being chased by an aggressive ostrich, at speeds of over 30 mph. Thankfully, the giant beast of a bird eventually gave up the chase and went on his way.

“We were on our training ride, around Cape Town, South Africa. The route was following the Cape Argus racing course with a detour to Cape of Good Hope. The road through the national park is quiet and a little deserted. Suddenly I heard a noise on my left and saw a big ostrich in the bush, most likely a female. In a second her friend jumped from the left a started chasing my friends! I was following behind almost falling of my bike from laughter. The creature had no problem to keep up at 50km/h! Luckily he left us alone because we were about to run out of the road, and it is a dead end at the Cape of Good Hope.” 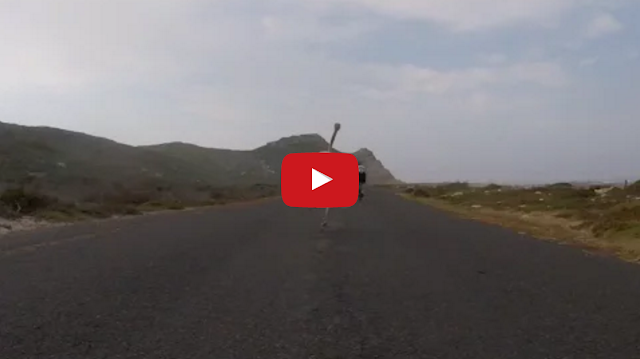