Math is hard. For the self-proclaimed “Side Hustle King” on Twitter, it’s near impossible. The CEO who apparently runs a business helping new investors pick the right stocks might not be the person you want to take financial advice from. Though he later claimed his tweet contained a typo, he rocked the financial world (and the world of snarky commenters on Twittter) with one simple question:

In what might be the worst financial advice since my local comic book store became a place that only sold POGS, @profitwithant became an overnight sensation. The sensation was, for many, like hearing nails on a chalkboard.

Anyone with access to a calculator and who has counted the number of months they plan on living from this day forth will know that $50 a month will eventually add up to $1,000,000… in about 20,000 months. With 12 months in a year, you’ll likely have your million bucks sometime in the year 3687 AD. If you’re still thinking about which is the better option, you may want to keep reading. Some other funny people on Twitter put the post into perspective.

In fact, the mere phrase “would you rather get paid $1 million…” has become a meme of its own.

Here are the funniest responses to the viral tweet about passive income and “getting $1 million now, or $50 every month for the rest of your life.”

1. First, let’s analyze the fact that being handed money is not the same as a salary. Both are passive. 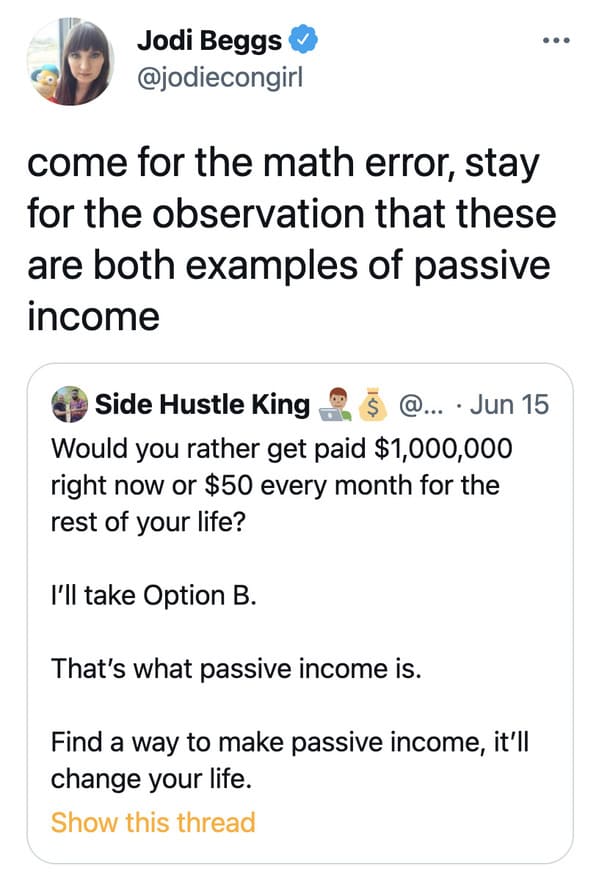 2. Secondly, the jokes started immediately. To defend the indefensible is a funny take. 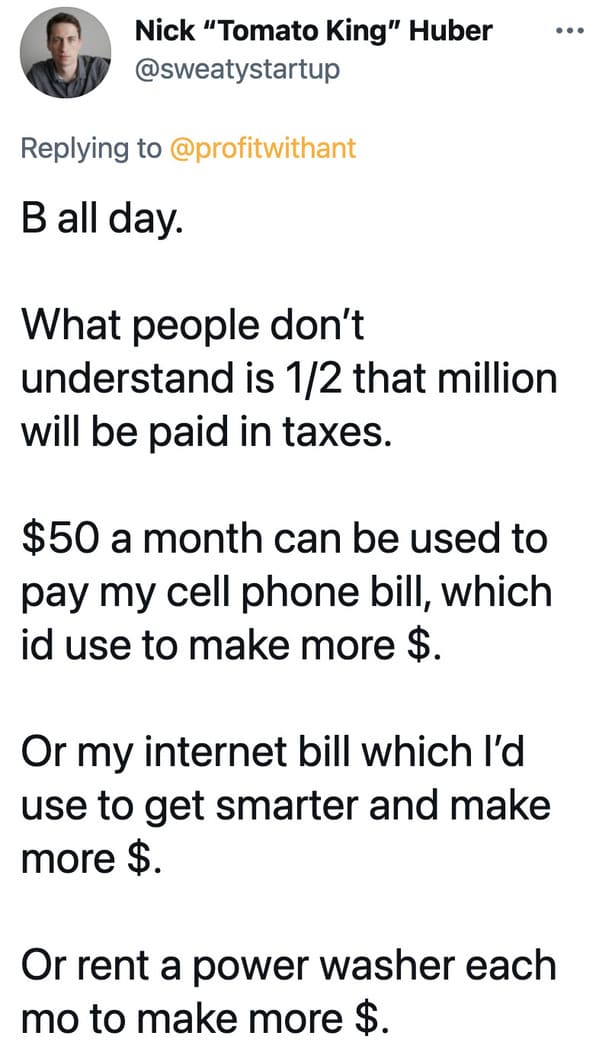 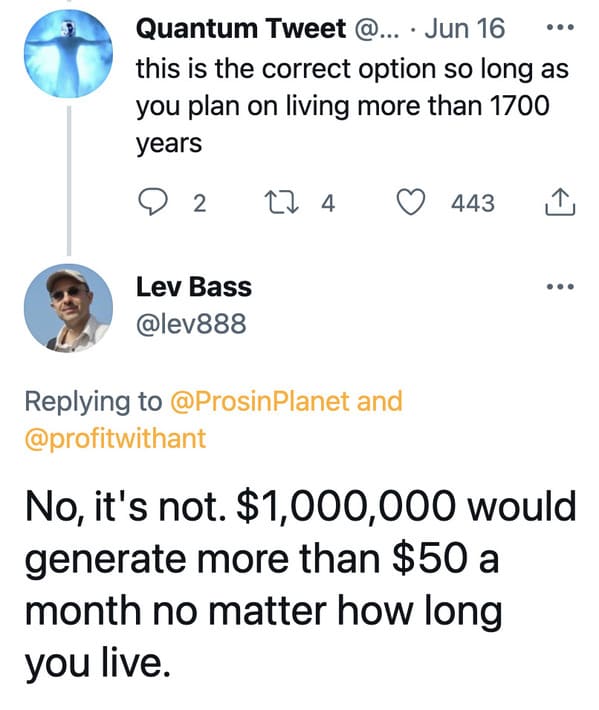 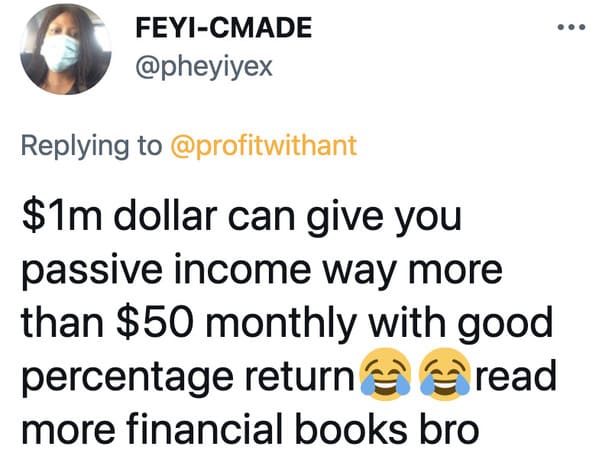 Let’s pause here and ask ourselves why we wouldn’t take a lump sum of $1,000,000. Perhaps, you win the lottery someday. In that instance, they’d probably offer you a ton of money now or a lot of money every week. Which should you choose? Taxes are the main concern at hand. Or, if you don’t plan on living that long, I guess you could consider that too. But, the most important thing is… even if the government took half of your $1 million lump sum fund… you could invest it in nearly anything, and have more money than you’d have if you took the $50/week plan.

I believe you can only insure a bank account for $250,000, so you should likely invest in the stock market. Indexes generally spit out more in dividends than $600 per year, but also, there’s a good chance the stocks go up and you make a lot of money. You could also buy a house with cash. Sure, it takes money to pay the taxes and upkeep, but guess what… you have a dang house now. Take out a mortgage on your house you already own. Dang. This isn’t that tough! 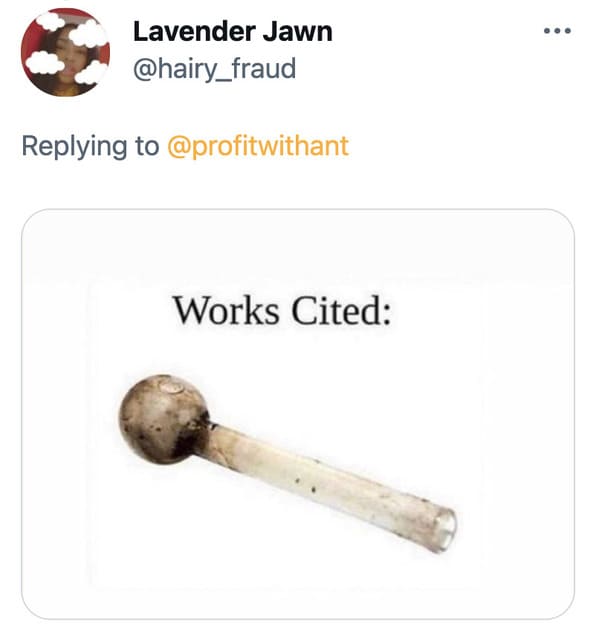 6. Some people aren’t in it for the money. 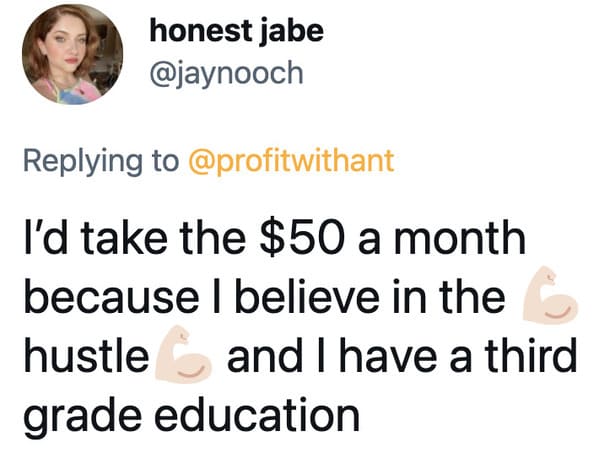 7. Seems like a good investment. Take him up on it! 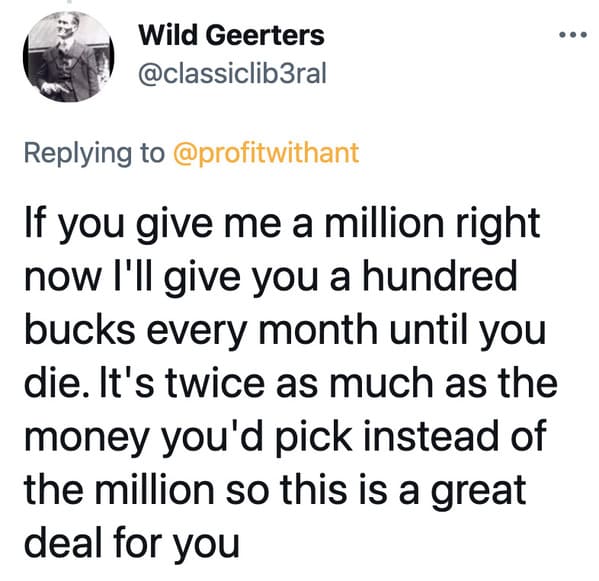 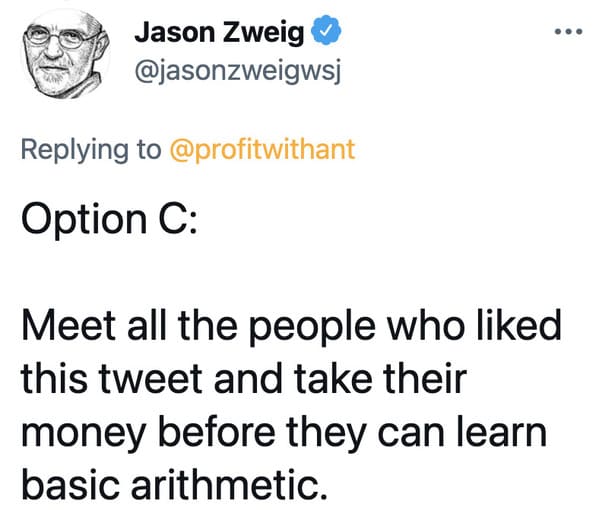 The math error was so dumb, Twitter had a field day offering even worse financial advice. Eventually, you could say “$1,000,000 right now or…” and everyone would know you were cracking a joke.

Here are the funniest versions of the math error becoming a meme:

9. Which would you take? 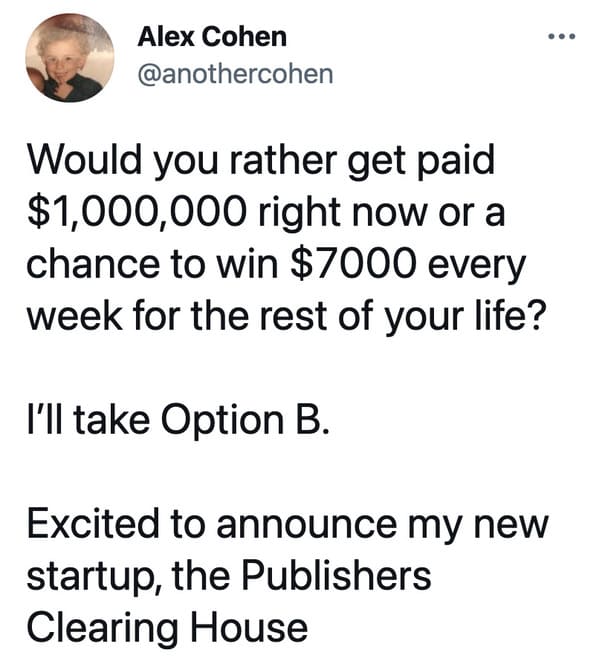 12. Which do you honestly deserve, though. 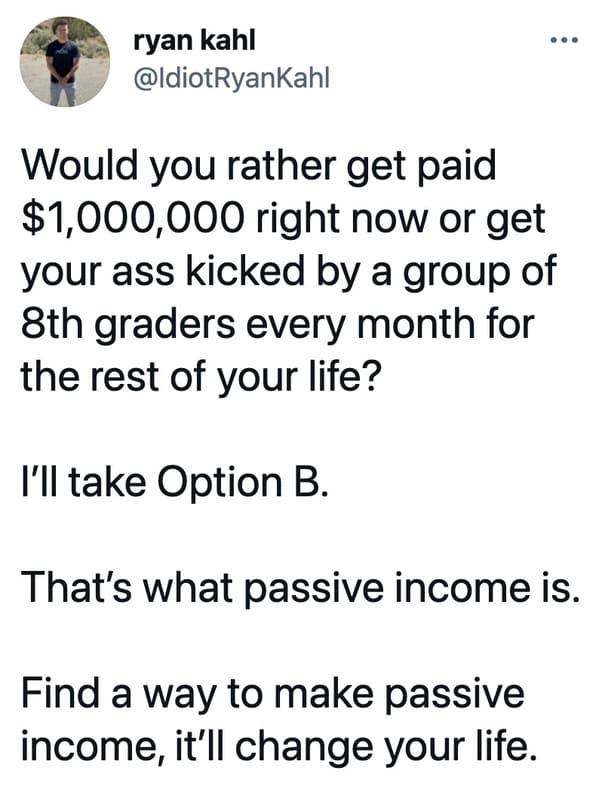 13. Take the trinkets. They could be worth something. 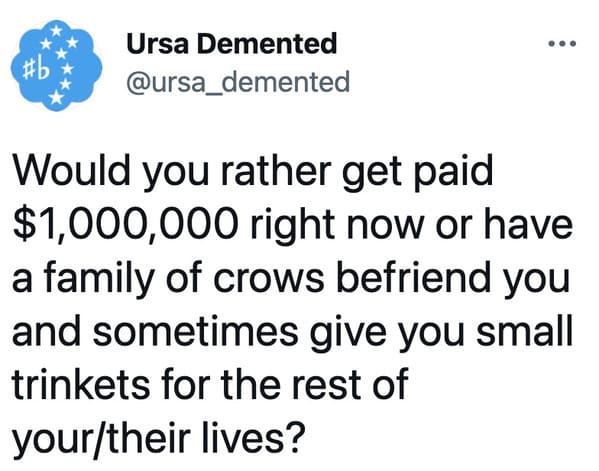 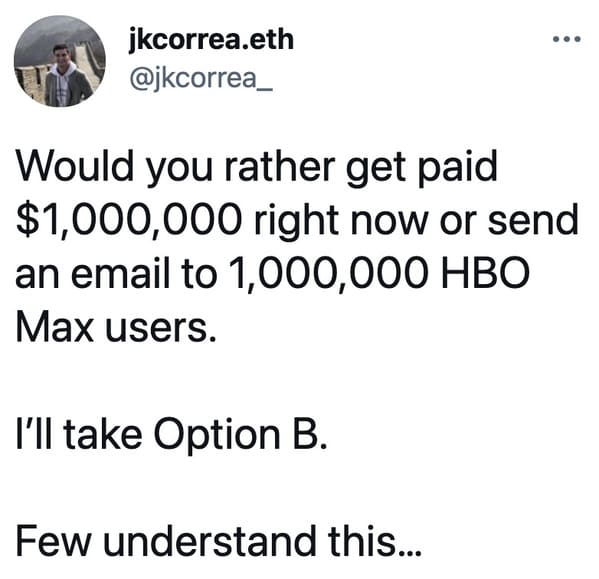 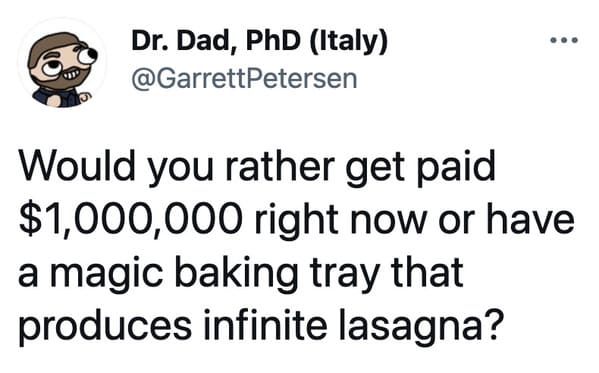 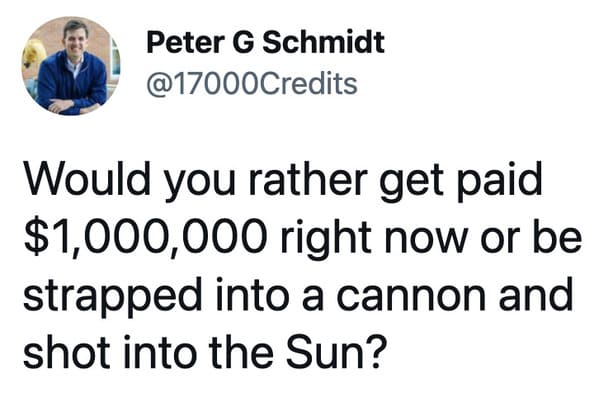 The important thing to remember is no matter what mistakes you make, just keep hustling. That’s what this guy did. 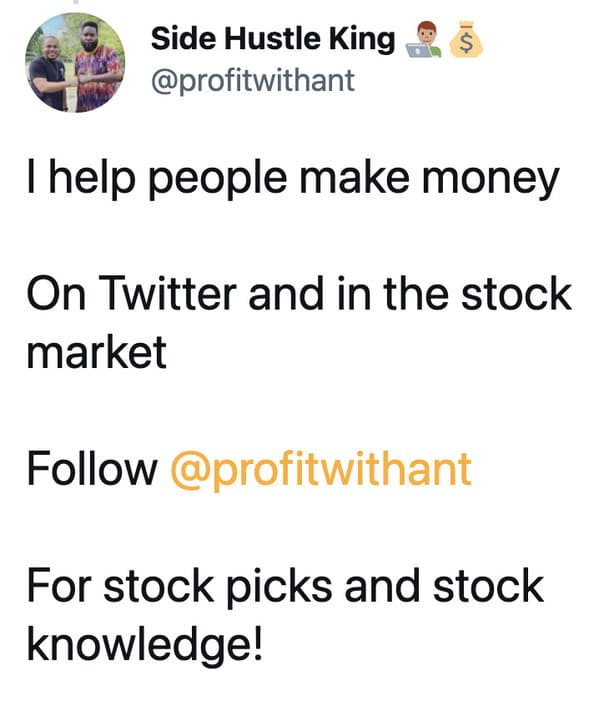