The true battle of the sexes is fought and won around the house. Forget all this political gibberish being thrown around. The microaggressions at home are real and affect all genders (somehow “boyfriends” end up being common culprits though).

No one is safe from the purposefully ignorant, even when you’re dating them. People who drag their feet when it comes to helping around the house are either not to be trusted or possibly depressed. I’m not here to diagnose, just to report.

Anytime I leave dishes for a week at a time, I’m having “an episode.” The guy in this story, however, is being a dick.

But we’re getting ahead of ourselves. A woman went to Reddit to ask if her strategy to get her boyfriend to help around the house was petty, and boy did people have answers.

Here’s the story from start to finish about a boyfriend being purposefully bad at chores:

It begins and she has her suspicions…

I felt pretty frustrated with that and told him straight up that I knew he didn’t forget how to clean since he moved in with me; he was always very competent living alone and I didn’t appreciate him “forgetting” how to do chores.

I said that when I asked him to do dishes and he refused and refused until he finally did them wrong, that I was not that stupid.”

Now, now. Let’s hear what he has to say:

“He said that he was trying his best and I was wrong for saying he was trying to manipulate me. And that from his perspective I asked him to do something and he did it the best he could and I kept at him because it wasn’t up to my impossibly high standards and he couldn’t win… And he wanted me to believe him when he says he is trying.

Anyway, this might be petty but I decided to give ‘believing him’ a try.”

“He had bleach stained my favorite little black dress. Instead of getting mad, next time he had a family event, I put it on.

He asked me if I was really going to wear that, it looked messy. I said that I loved that dress and understand accidents happen so I wasn’t mad or upset it had bleach spots, actually. I thought it looked kinda cool.

He said he really thought it looked bad and I said if he wants he could sharpie on the white spots real quick in the Uber. It ended up looking even worse.”

“Another time, we were having dinner and he had done the dishes, but put some of the cups and bowls in the dishwasher upside down so they filled with dirty dishwater. I took those cups and bowls, dumped them out in the sink but didn’t wash them further, and served his food in them. He said that it was dirty and I was like “They just came out of the dishwasher! It’s just water, it’s fine.

He said that no it was disgusting, and I said it was really no biggie, I was getting over my impossibly high cleanliness standards and I really didn’t think it was that gross.”

“The last time, I had cooked for a work party of his. After cooking, the dish needed to cool for about 30 minutes then be refrigerated. I had plans with my friends that night and I asked him to put the dish away after it cooled. He forgot.

The next morning he noticed the dish was never refrigerated. I said it was fine, it was just a mistake, and it would probably be fine to eat, there wasn’t a lot of meat in it.

He got frustrated and said that you can’t serve meat left out overnight even if it is “only a little” and I said ‘oh I think it should be okay, stuff happens'”

Yikes. Well? Did it work?

“He’s stopped being so lazy about chores after he realized I seem totally okay with leaving stuff done badly and that he’ll be living with it.

But I feel a little petty for having been dishonest about it. I actually hate how my bleached dress looked and my stomach turns at dirty dish soup and unrefrigerated meat.” –u/lappisl

Was she the jerk in this scenario? Reddit users chimed in: 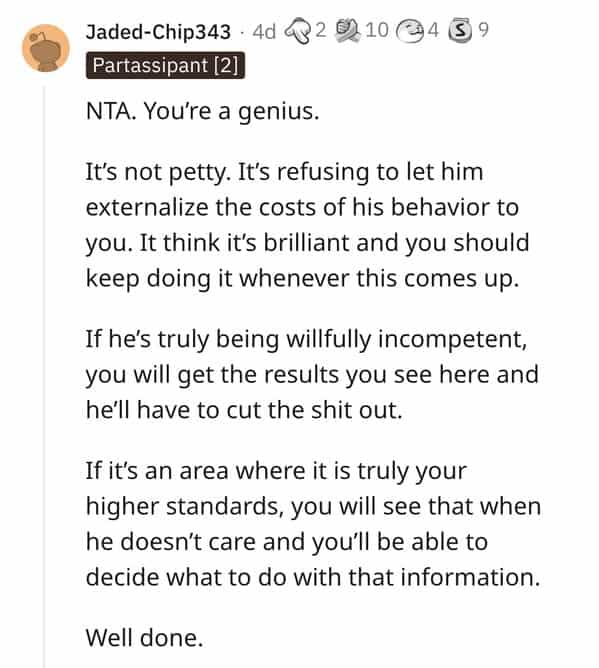 That’s pretty much the consensus. Better luck next time, dude.