I’m not crying, you’re crying! Celebrity deaths hit us all in different ways. Recent celebrity deaths, like Alex Trebek, have us wondering who we’ll spend our evenings watching. Some deaths seem like utter tragedies, people who were taken too soon.

I have something in my eye. Something in my eye that reminds me of the glint in late Robin Williams’ eyes. Oh boy. Why do we care about people we don’t actually know? Why do we feel like we know them when we’ve only seen them in movies and on TV.

Layton E. Williams asked Twitter which famous person’s death hit people the hardest, and everyone had an answer: 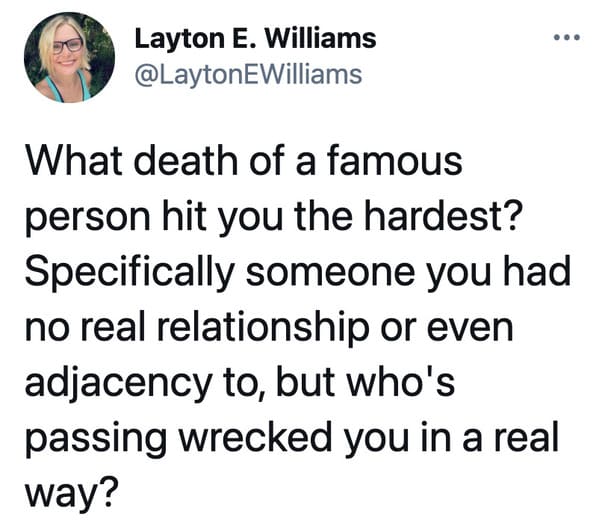 She was thinking of her own answer when she was inspired to post the question: 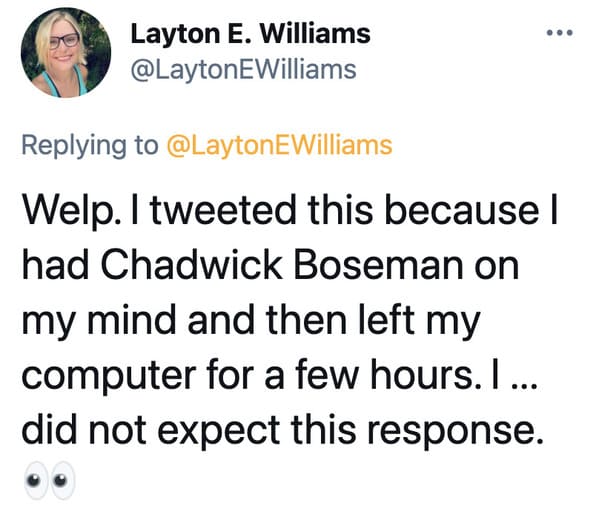 It’s time to take a deep breath and see which famous people meant the world to strangers.

Here are the celebrity deaths that made the whole world cry: 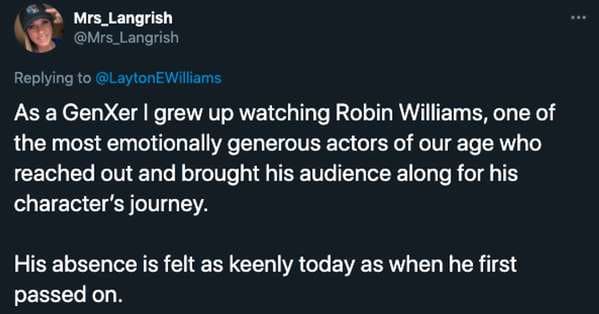 Ruth Bader Ginsburg and John Lewis. I sobbed for days and still feel this loss pic.twitter.com/z6Do99gIxI

I loathe the hereditary aristocracy that seems to be forming here in the US, but Lady Di was the real deal. pic.twitter.com/qkCkXRWInx

I cried a lot over Michael Jackson. Grew up with his music and watched the Jackson 5 show on TV. I know of the accusations and the pay offs and admit to loving the music.

Carrie Fisher’s death really hit me hard. Knowing she was still very young and her career was picking back up made it very difficult. She was a classic in every way and an inspiration to so many everywhere. pic.twitter.com/sn5c5SAlB6

Avicii. I was supposed to see him live but decided not to because I was anxious about the concert environment. Social anxiety and big crowds don’t mix well. I told myself I’d see him perform another time, when I’d gotten over my anxiety some. And then he died. I was crushed pic.twitter.com/H97Z16naG2

This young man took a piece of my heart a long time ago & never gave it back. It’s with him even now, wherever he may be. pic.twitter.com/ETcrq4LWVk

Kurt Cobain died before I was even born but I have never healed. pic.twitter.com/sRIn5ddeaY

It’s an odd thing about the deaths of famous people. There have been a few that hit hard, often inexplicably. I didn’t grow up with his creations but Jim Henson’s death affected me very much. pic.twitter.com/QnLVeRZoPV

I couldn’t say why until one of his friends, in an interview, explained that with his shows, books.. he was inviting us into his meals.. sharing an intimacy that you only have with friends. That’s paraphrasing but.. there you have it.

Patrick Swayze. I was young but I remember just being so sad for how he passed and for his wife he left behind. He seemed so kind pic.twitter.com/vpVPWy0g4U

John Prine. Drove home that Covid was going to be a long — and devastating — slog

Stevie Ray Vaughan, he was only beginning to tap his genius. pic.twitter.com/gTYlvDgSBL