Is it wrong to eat animals? That’s a question I ask myself every day while making a ham, egg, and cheese omelet. Certainly, anything that feels pain would prefer not to be eaten, but what if eating other living things is how it was meant to be. I fear I’ll get to purgatory, and God will show me how many chickens had to die so that I could live. It’s going to take a while to work off that karmic debt. Regardless of what you believe, you should at least agree that knowing what you’re eating is important. One person, however, was tricked into eating vegan food, and then sued the person who fed it to her. Was she right or wrong?

A person on the popular Reddit board “Am I The A**hole?” had a complicated question about a sneaky vegan roommate. She asked: “AITA for filing charges against my roommate and suing her for my hospital bill?”

She laid out the story as concretely as she could, and many people had a strong opinion on the matter.

Here’s the story of how a vegan roommate would up getting sued for lying about what food she served to the people she lives with:

This happened several years ago.

I was a 20F and in college. I was living with my two best friends. One of them was moving out so that she could move in with her boyfriend. I placed an ad looking for another roommate.

That’s how I met Erin. Before she moved in she informed me that she was vegetarian but she wouldn’t have a problem if other roommates weren’t. She moved into our apartment a month later.

The next day after she moved in she cooked breakfast for us. I was surprised. We didn’t ask her to and by her own words “she wanted to do something nice”.

She had made pancakes, bacon strips, and hash browns.

The narrator adds a very important piece of information…

I am deathly allergic to few things.

So, I immediately asked her what was in the food, but I didn’t mention my allergies (huge mistake). She listed the ingredients and I didn’t find anything I was allergic to. (she told me it was regular bacon. Not that it was fake bacon or that it had soy). I start eating and everything tastes a little off. I try the bacon and definitely something is wrong. At this point, she does a ” Ta-da!” and smugly told us “I bet it tastes exactly like meat”.

So, what? How bad could this get, really? Well…

I am freaking out now. I told her I am severely allergic to soy and asked her whether there was any soy. Now she is apologizing and says she didn’t know and that she is sorry she lied and blah blah. I am experiencing anaphylactic shock: throat closing up, dizziness, the works. My best friend freaks out and calls an ambulance. I had to stay in the hospital for 2 days. With US healthcare, the ambulance + my hospital stay racked up a lot of money. Money that I didn’t have.

In the meantime, I also filed a complaint with the police. Food tampering is a felony. I had a lucky break: my best friend had filmed the breakfast to post it on Instagram and she got the whole thing in the video.

Wow. This story went further than I thought it would.

In the end, Erin had to plead guilty to some low degree of felony. She didn’t get any jail time but got community service. Once she was found guilty, I sued her for the hospital fees. I won that one too.

I’m sure Erin was fine though, right?

Erin’s scholarship was canceled and she had to drop out. She also went into debt paying my medical fees. I saw her on Facebook a few days ago and she is still down on her luck. I guess a felony charge makes it very hard, no matter how small the charge was.

I know she is the asshole for lying about food. I wanna know whether I am the asshole for everything I did after. Because the bottom line is, I basically screwed a person’s life because they put the wrong ingredients on breakfast that they made only “to do something nice.”

What do you think? The people on Reddit had a few strong opinions:

1. This person believes “everyone sucks here.” 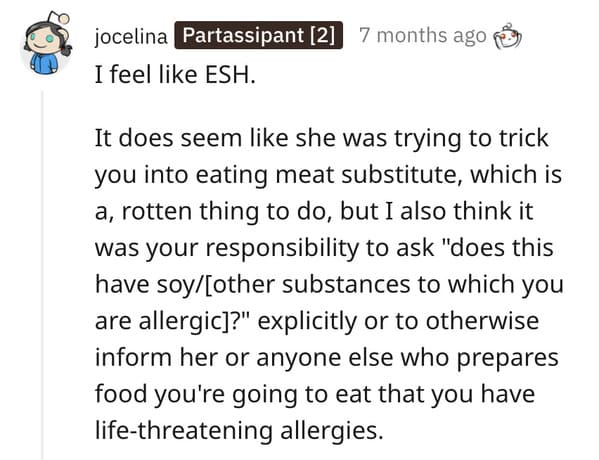 2. This reader believes she did what she had to do. 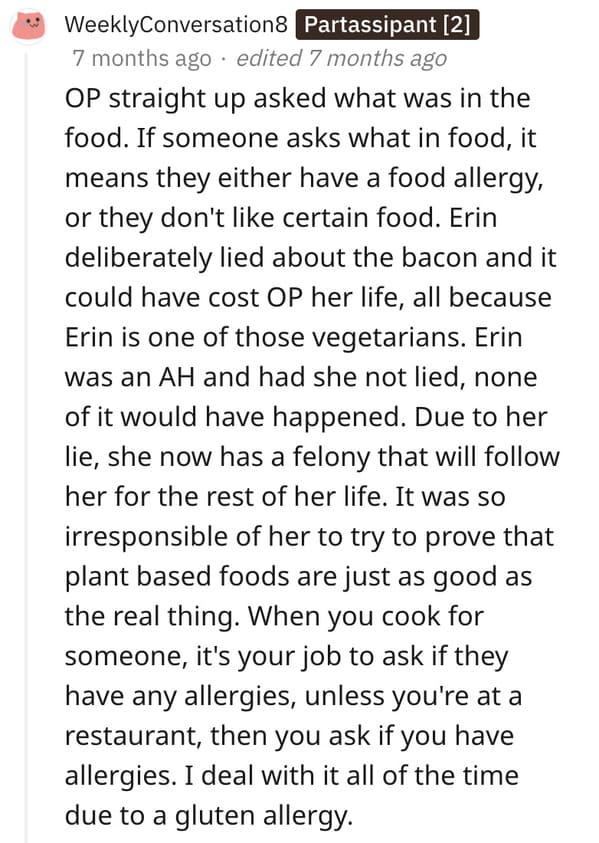 3. Since when does bacon have soy? 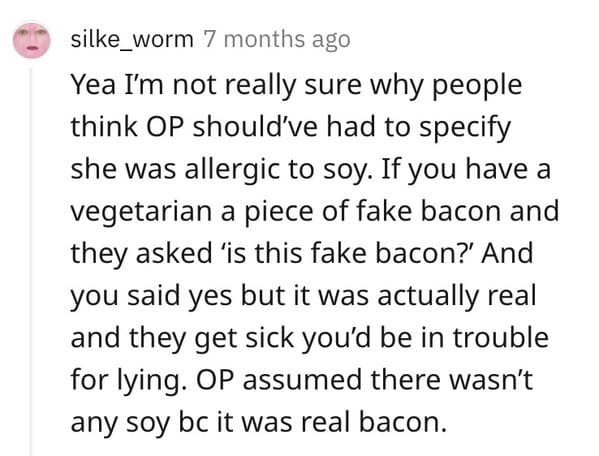 5. Ask and you SHOULD receive something not poisonous. 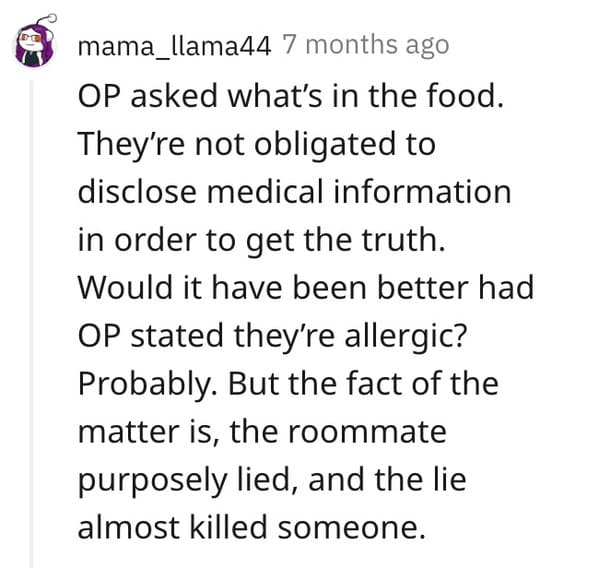 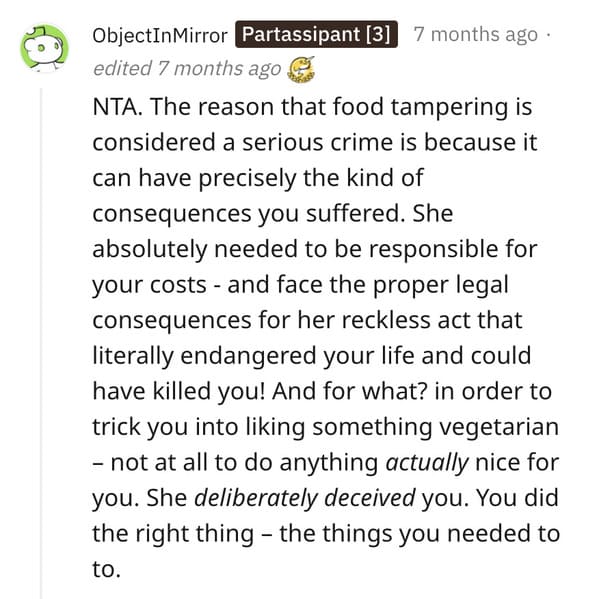 7. An important point of information. 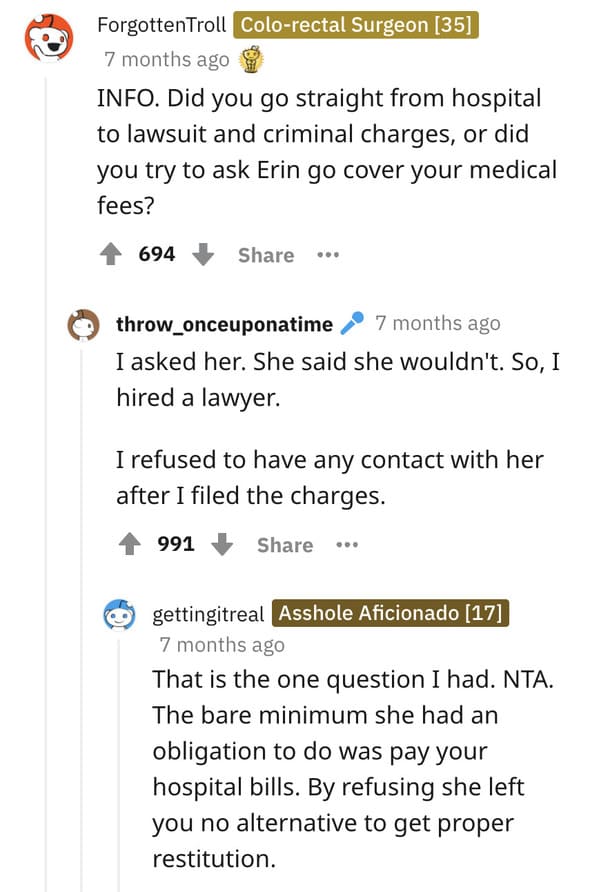 8. Others seem to think she did the wrong thing. 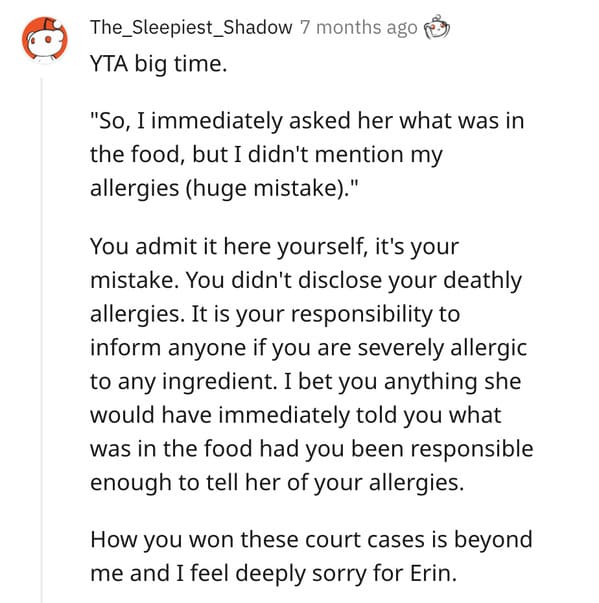 9. Some people were incredulous. 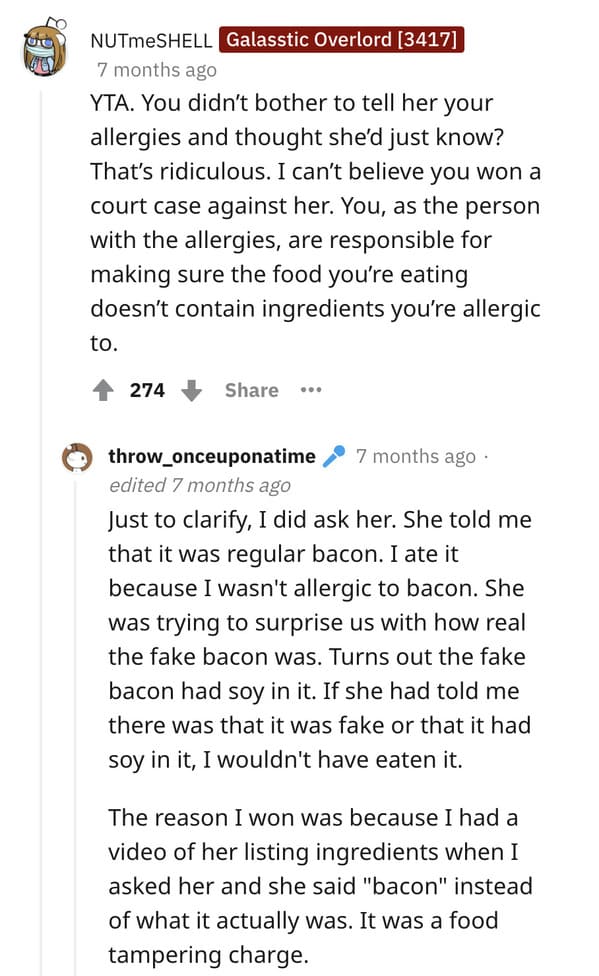 10. People didn’t even want to believe it happened. 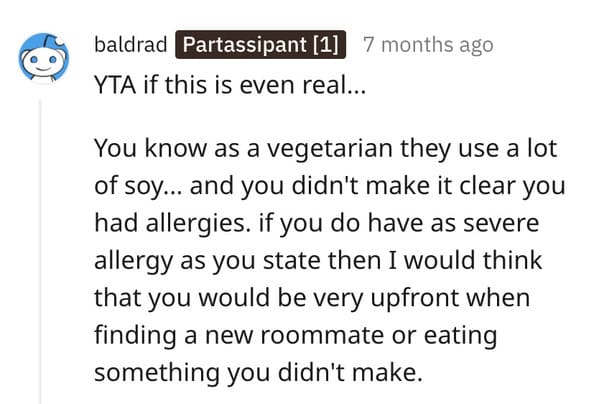 11. Many posters landed on this take.

The original poster replied to the replies and it wasn’t pretty.

“You guys are bitching like as if I wrote the law on food tampering or like I was the PP who decided what charges to file or like as I if I was the judge/jury that gave the verdict. This is a snore-fest. Throwing the throwaway account.

You guys can keep whining all you want but that doesn’t change the verdict.”

Wow. That was a wild ride.