We all have strategies for saving money. Occasionally, one will sound like a scam. Usually, however, we’re all just bargain-hunting. One woman on Reddit asked if she was a jerk for playing to people’s pity by insisting she doesn’t have money when she does, in fact, have it. IS she being petty and cheap? Or is she doing the exact right thing? Her boyfriend made her second-guess her choices, and the Internet had a clear opinion on the matter.

When it comes to budgeting, anything short of stealing from other people is probably fair. It is, after all, your money. You don’t have to tell everyone you’re solvent or that you’re so deep in debt you’re worth more dead than alive. Whatever keeps you moving forward and able to afford new Nikes is fine by me. Tax fraud? Don’t do that. Claiming your LLC lost money because you wrote off $30,000 in “client meals” with your own children? The legality is for the lawyers and IRS to decide. You just do your best.

Reddit is a great place to receive honest feedback. I put a photo of myself on r/RoastMe and they gave me brutally honest feedback. So, whenever someone posts on r/AITA, I like to read the comments so I know what people actually think.

Here’s the story of one woman who thought acting like she had no money was no big deal:

First, she set us up with some background information.

I am doing an engineering job making a good amount of money and I save a lot so I’m definitely not actually broke.

I sometimes act like I am, and it frustrates my boyfriend though. I’ll give a few examples.

A few weeks ago I went to get some work done on my car. I called ahead and the shop quoted me $150 for parts and labor so I said ok and drop off my car. Later that day they call me and say my car is ready to be picked up… But the job was way more complicated than expected so the cost was actually $320. I told them that was more than we agreed on and they were still being pushy.

I just go “Oh God, I’m so sorry but I don’t have the extra money. I called around to all the shops in town this morning and went with y’all because your original quote was the only one I could manage.

Would you simply shrug and hand over your money? I know I would and have every time.

The guy at the shop kinda hemmed and hawed and I go “maybe you could take the parts back out, I’m really sorry but that’s way too much”

He was like “no, no I’ll honor the original quote.”

So that was something I didn’t feel that bad about but my boyfriend said it made him uncomfortable to hear.

Another time, we’d been trying to buy a new dishwasher and the guy at the store kept trying to upsell us on like a bunch of different things. and I was getting frustrated having to say no three or four times over so I go “I don’t have the money for anything but the dishwasher, no extras”

My boyfriend said he didn’t like how I lied, and it makes him uncomfortable to be around me when I’m lying because then he feels brought into a lie.

The big stressor was when he said an old friend of his had invited us to a party to celebrate opening her business. We decided to go, I enjoy parties. I didn’t realize that this business was … Uhh kinda a pyramid scheme until we got there and the party wasn’t just a party but a push to get people to buy in.

So, I started declining stuff by being like “uhh that’s really expensive, I really didn’t expect to be spending anything tonight, so it’s really not in my budget” and “Sorry, I really don’t have 100 bucks for that.”

When a Ponzi Scheme is sensed, all bets are off, IMHO.

His friend stopped trying to sell to me much but it was a super weird vibe. It really wasn’t a party where you could just hang out and talk and drink.

Anyway, my boyfriend pulled me aside part way through and said I was embarrassing him in front of his friends and he really wanted me to drop the “broke act.”

I said OK, but I wanted to leave and he took that as a sign I was being petty about what he had asked me to do, when honestly I was really just not enjoying the not-a-real-party.

He’s been kinda frustrated with me since and when I got my last paycheck he was like “oh yeah real broke getting $10k” and I snapped at him to say to stop going on about it.

Hmmm… I do have a piece of advice for this dude…

Now I’m wondering if I was the asshole for using that excuse? My boyfriend thinks so.

AITA for saying that I don’t have the money when I honestly just don’t want to pay for something? My boyfriend thinks it’s uncomfortable and embarrassing and that I shouldn’t do it. 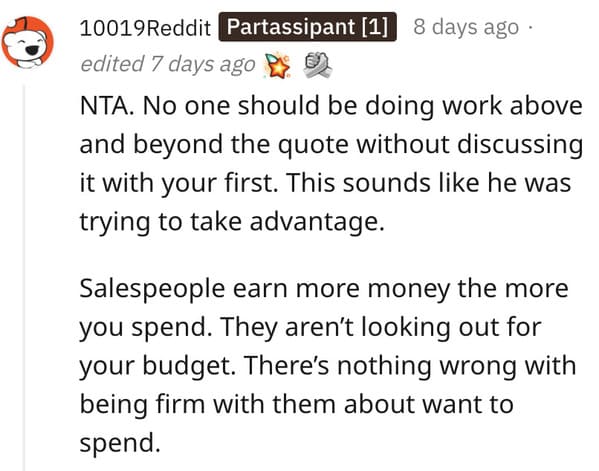 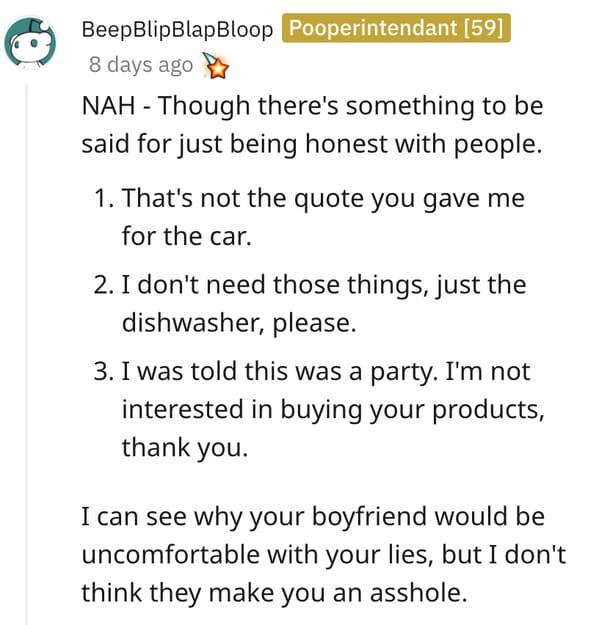 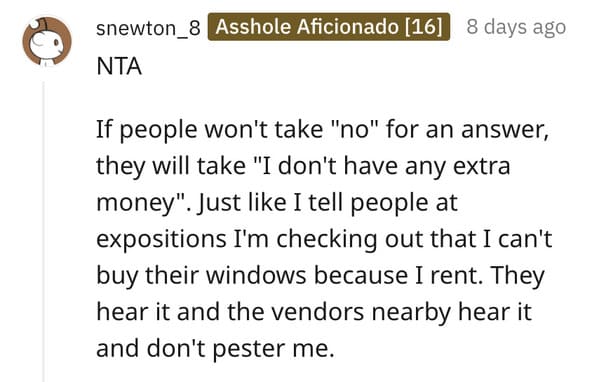 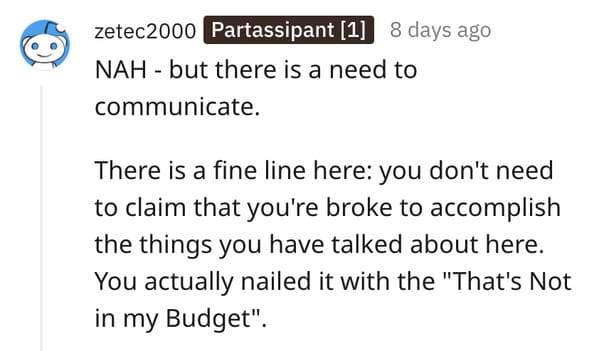 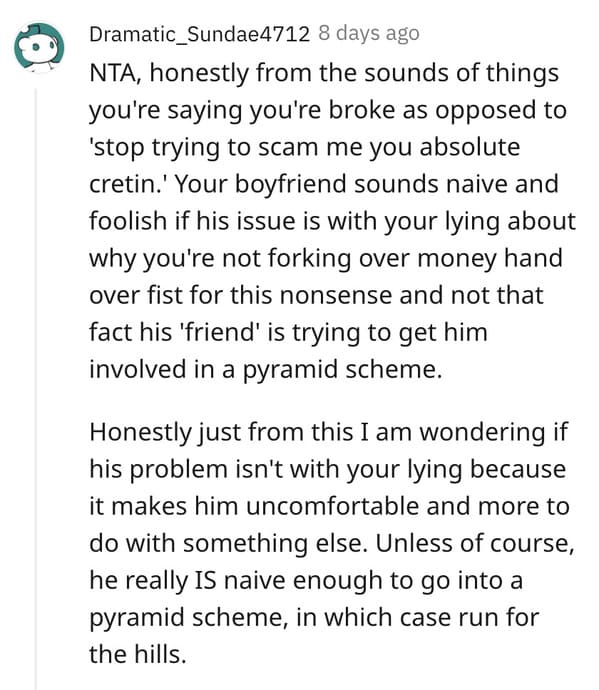 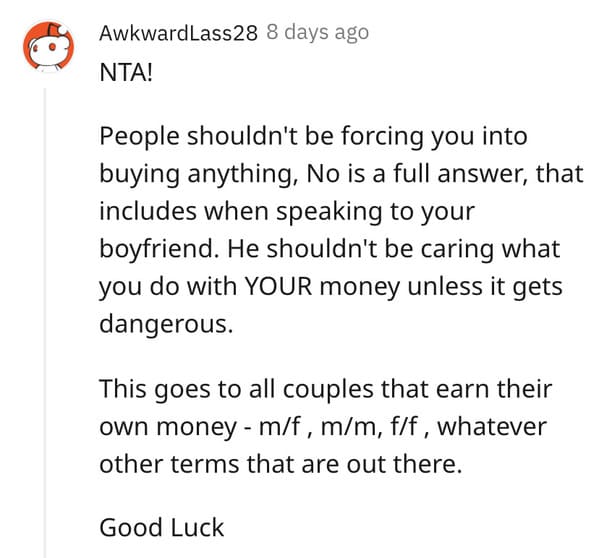 There you have it, folks. Not the asshole.