Going to a restaurant needs to be more like getting on a plane. People should have to show ID, and prove they haven’t terrorized a waiter or waitress in the past. There should be a “Do Not Serve” list.

Otherwise, we’re going to constantly see stories like this one. People who can afford to eat out at restaurants but can’t afford anyone else the courtesy of not being a jerk should stop eating in public altogether.

Honestly, it’s the least they can do. Or, if they want to be monsters, they can start tipping 500% each time they go. I doubt they will. I doubt they care about the lives of other people at all.

A man posting on the Reddit forum r/AITA asked if he was wrong to shame a friend of his wife for how she treated a waitress. The internet has the answer.

Let’s read the whole story from the guy before we judge though.

Here is the story of a man who asked the internet if he was wrong to shame someone for how they treated a waitress:

Here’s how it all went down:

“My (23M) wife (22F) has a friend who she has known for around 10 years, and who I met during high school. We got along pretty well in school, but over the years she has become much quicker to anger, snaps at every little thing, and has on several occasions screamed at my wife for wanting to spend time with me at home rather than go out to the bar.

Despite all of this, my wife has stayed friends with her, and I understand why. Isolation over the past year had been hard on us, and my wife was not able to see many of her friends as much as she used to, so having contact with her longest friend again has been something she wants to keep.”

Sounds fair. You’re not going to like all of your partner’s friends. What else?

“The event that caused this specific issue happened a few days ago. My town had its annual jubilee parade, which is a huge occasion and generally brings in massive crowds for a rodeo, downtown party, and a big music festival at the end of the weekend.

This also means every single restaurant is absolutely packed to the brim. My wife and I met her friend at one of the restaurants in town, and it took only around 30 seconds for said friend to snap at one of the hostesses for not seating us immediately. There weren’t any clean tables yet, and it took only about two minutes to get a clean table, but even as we sat down the friend was already rolling her eyes, and the hostess and waitress and complaining.”

Wait… it gets worse.

“It took around 10 minutes to get our drink order in, which again the restaurant was absolutely packed. When the waitress came by with our drinks, the friend berated her for taking so long, but shut up once we put our food order in.

We get our food about 20 minutes later, and things are quiet as we’re eating. However, my wife’s friend began to criticize the wait staff for how long they were taking to do things and saying things like, “I’ve worked in the food industry, you wouldn’t see me making people wait this long for their food and drinks”, and generally putting down the workers in the middle of a rush.”

If she’s worked in the food industry, shouldn’t she be nicer? The story continues:

“The tipping point for me, ironically, was when we were leaving, and I was leaving behind the tip for our waitress. I went higher than usual (somewhere around 55% of the bill) because our waitress looked incredibly stressed and tired. The friend, seeing me putting the cash down, asks in a very snarky tone, “why are you tipping at all for such shit service?”

I should mention that the waitress was standing right there the whole time. I went off on the friend for this, telling her she needs to stop acting like a child and expect everyone to treat her like the center of attention. She seemed to get very embarrassed by this and left the restaurant immediately, and my wife went after her. Later that night, my wife came up to me and said that while, yes, the friend was being obnoxious, I shouldn’t have called her out publicly, as I had embarrassed her in front of the whole (packed) restaurant.

I feel like I might be the asshole for calling out my wife’s friend publicly, instead of approaching her in a more calm manner privately after this took place.” –u/ZealousPapaya

Well… what do you think? Reddit users know their opinion and they shared it with us.

Here’s what the Internet had to say about this person’s dilemma: 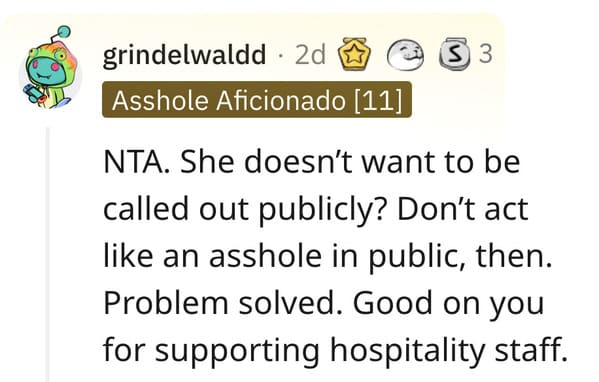 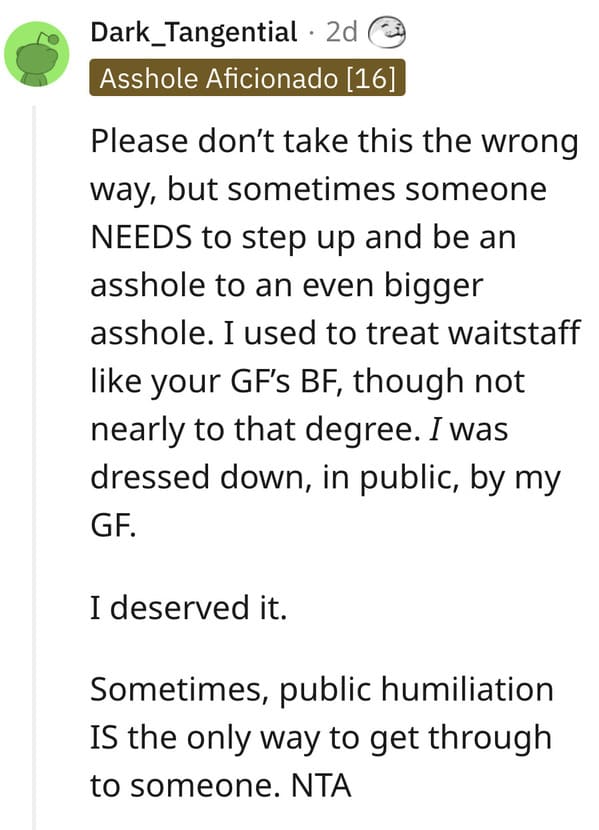 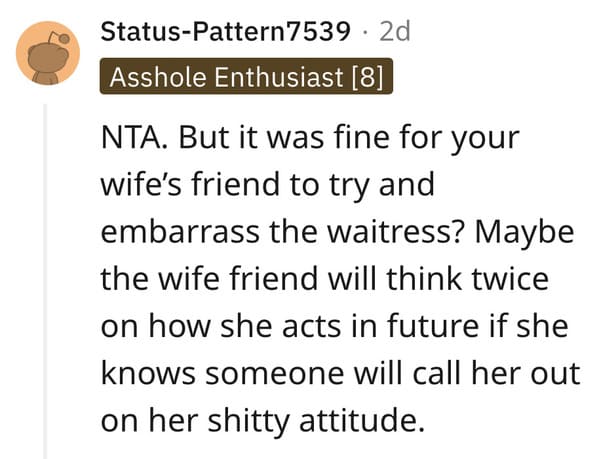 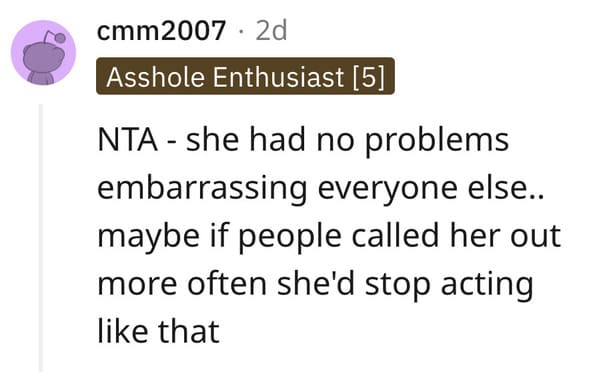 6. An alternate approach could have worked, but still… 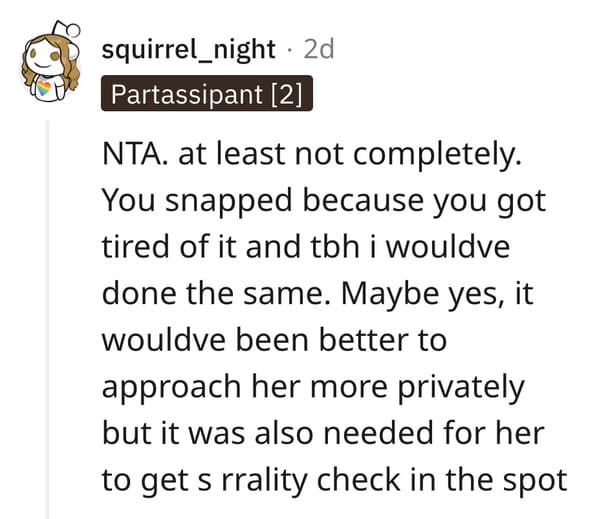 Seems unanimous: this person is not the jerk in this situation.